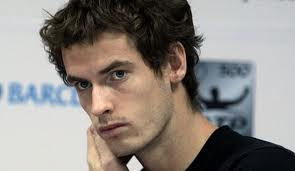 Current No 4. in men's tennis world Andy Murray has split from his coach of two and a half years Miles Maclagan. The duo have separated on amicable terms with Murray stating "I've had a great relationship with Miles over the past two-and-a-half years and I want to thank him for his positive contribution to my career. Maclagan joined Murray’s team in 2007 when the Scot was ranked number 11 in the world. He has since overseen a period of Murray’s career which saw him rise to number two in the world for a brief period in August 2009 and has guided him to a US Open final, Australian Open final and consecutive Wimbledon semi-finals.

Murray is currently partaking in the Farmers Classic in Los Angeles; his first tournament since Wimbledon as he begins preparations ahead of the 2010 US Open, which begins on August 30 at Flushing Meadows.
Posted by kkkk at 8:25 AM 1 comment: 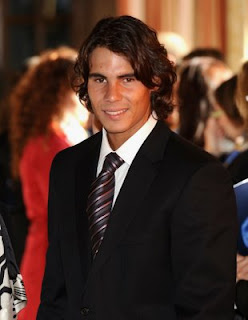 Latest Wimbledon champion Rafael Nadal has become a shareholder in Real Mallorca in an attempt to help out the cash-strapped club.
Nadal is well known for his love of football and will be in South Africa for Spain's World Cup final against Holland on Sunday. He is a passionate supporter of Real Madrid, however the world number one, who was born on the island of Majorca, has now dug into his pockets to help his local club.

"It's an honour to be able to help Real Mallorca, I will help in any way I can,'' said Nadal, who claimed his second Wimbledon title last week.

It is the latest in a series of positive news for Mallorca, who are struggling with debts reported to be around €85 million (£71.2 million).

Matters appear to be looking up for the islanders after a group headed by former coach Llorenc Serra Ferrer became majority shareholders last month and swiftly installed Michael Laudrup as first-team coach. Nadal's uncle, Spain and Barcelona legend Miguel Angel Nadal, was then appointed as Laudrup's assistant, returning to the club where he made his name.

The 24-year-old tennis star is delighted to be making his contribution. "I am proud to be a part of this new project put together by Majorca locals,'' added Nadal. "I am very pleased to have Laudrup as the new coach and as the image for the club.''
Posted by kkkk at 8:56 AM No comments: 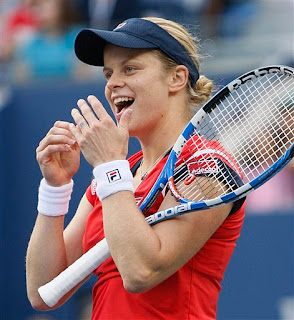 At the King Boudewijn Stadion in Brussels last night(09/07/2010), Kim Clijsters and Serena Williams played the BNP Paribas Fortis Best of Belgium event.
The tennis match broke the world record for the most spectators.

The previous best was 30,472 to watch Billie Jean King and Bobby Riggs in Houston in 1973.

Well the two girls well and truly beat that when 35,768 fans turned uo to see Kim beat Serena 6-2 6-3.
Martina Navratilova was the guest umpire, and many famous Belgian popel attended including the King and Queen.
Posted by kkkk at 8:49 AM No comments:

Longest Match In The Tennis History 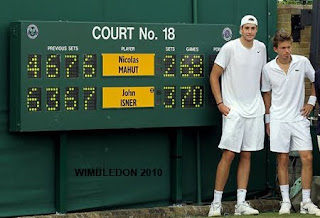 
John Isner hit a backhand up the line Thursday to win the last of the match's 980 points, and he beat Nicolas Mahut in the fifth set, 70-68.
The first-round marathon took 11 hours, 5 minutes over three days, lasting so long it was suspended because of darkness — two nights in a row. Play resumed Thursday at 59-all before an overflow crowd on cozy Court 18 and continued for 20 games and 65 minutes before Isner won.
The score that broke the scoreboard at one point: 6-4, 3-6, 6-7 (7), 7-6 (3), 70-68.
"When you come out and play a match like this, in an atmosphere like this, you don't feel tired really out there,'' Isner said, "even though that's exactly what we both were.''
The match lasted so long because neither player could break serve. Isner finished with 112 aces and Mahut had 103, with both totals eclipsing the sport's previous high of 78. They combined to hold for 168 games in a row.
It stinks someone had to lose,'' Isner said. "But to be able to share this day with him was an absolute honor. I wish him nothing but the best, and maybe I'll see him somewhere down the road, and it won't go 70-68.''
The fifth set alone took 8 hours, 11 minutes, surpassing the previous longest match, which took 6 hours, 33 minutes at the 2004 French Open.
"We played the greatest match ever in the greatest place to play tennis,'' Mahut said. "John deserved to win. He just served unbelievable.''
Isner said he felt "completely delirious'' by the end of play Wednesday. He estimated he ate a dozen energy bars and drank 30 to 40 bottles of water during the match, and he was glad he trains hard in the heat of Tampa, Fla."My coach actually, believe it or not, said jokingly before the tournament started that I'll be able to play 10 hours,'' Isner said.
The crowd roared when the players walked on the court Thursday. Mahut wore an intense expression, while Isner smiled and waved. The electronic scoreboard was again working after it froze and then went blank as the fifth set approached 100 games Wednesday.
When play resumed and Isner held in the first game after reaching deuce, Lahyani announced the score.
"Isner leads 60 games to 59, final set,'' he said. The crowd laughed.
Both players continued to dominate with their serves. Mahut, always trailing when he served, held at love five times, and appeared to be the fresher player.The Frenchman hit a leaping overhead to end one exchange and skipped to the baseline following a changeover, while the 6-foot-9 Isner moved deliberately between points. But in the 183rd and final game, Mahut sailed a forehand long and netted a drop shot on consecutive points to fall behind 15-30.
At 30-all, Isner hit a forehand winner for the first break-point chance of the day. Then he cracked the backhand winner for the victory — just the third service break of the match, and the only one in the fifth set.
The shot came at 4:48 p.m. — nearly 48 hours after the match started. The crowd gave both players a standing ovation that lasted long after the bear hug, and as Mahut sat in his chair with a towel draped around his head, Isner pointed at him and joined the applause.
"It's something Nic and I will share forever,'' Isner said. "I don't think I've ever said five words to the guy prior to our match — not that he's a bad guy. Now when I do see him in the locker room at other tournaments, we'll always be able to share that.''
Posted by kkkk at 8:49 AM No comments: